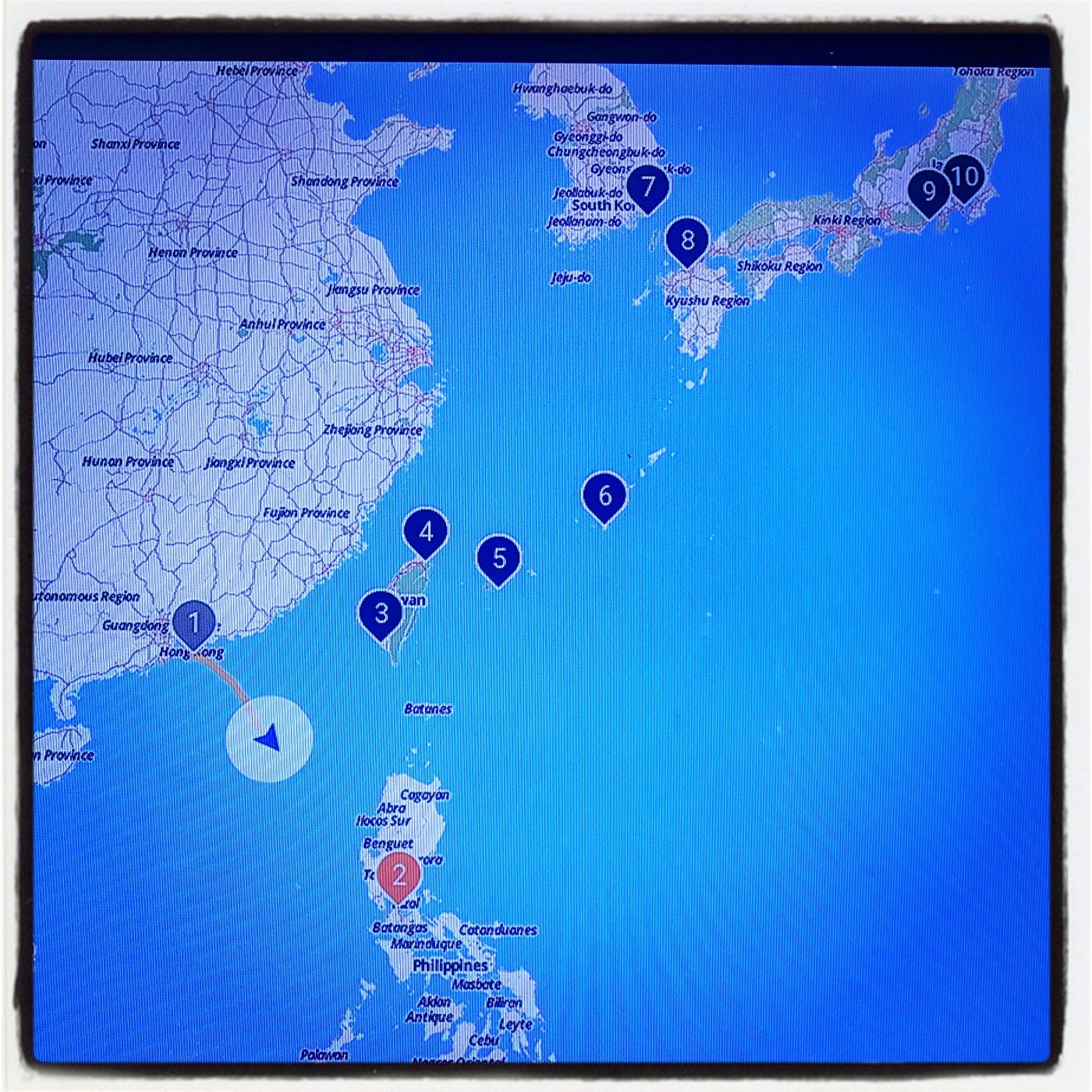 I was not planning on writing much about this ‘event’ but I really feel that I owe it to the phenomenal staff aboard this Holland America Westerdam ship to set the record straight.

For those of you who have not followed the news, there is currently a massive outbreak of Coronavirus flu that originated in Wuhan, China, about 700 miles or so inland from Shanghai. It has affected travel, initially just in Asia, but now worldwide because the outbreak wasn’t contained, or more accurately, symptoms detected, fast enough and has now quickly spread around the globe. Each day, new countries are reporting people being infected. Still, this coronavirus flu is not as deadly as the ‘regular’ flu that people around the world deal with every single year.

I have worked for the same fantastic tour operator, YMT Vacations, for nearly ten years and they hired me months ago to fly from my home near Washington D.C. to Hong Kong and escort a small group of 22 guests aboard the Holland American Westerdam. We initially had more guests, but many cancelled in fear of contracting the coronavirus. Before I left, I knew about the outbreak, understood the potential health risks, spoke to my superiors in the office about potential issues and concerns, bought masks, stocked up on every type of over-the-counter medication I could think of, and hopped on the plane. What I had anticipated, is not exactly what happened. It never crossed my mind that what would eventually happen to us, could. And as I write this, we are on day 9 since leaving Hong Kong, and on day 5 searching for a port willing to let us disembark and fly home. Nobody on our ship has the coronavirus.

The cruise was scheduled to leave Hong Kong on Feb. 1, 2020 and make a stop in Manilla, Philippines, several in Taiwan, one in South Korea, and several in Japan before disembarking in Shanghai, China. We were then spending two days touring Shanghai. That did not happen.

We left Hong Kong, as scheduled, and the first itinerary change was cancelling Shanghai, China, because the coronavirus was quickly spreading throughout China. We would now end the cruise in Tokyo, Japan. My office did an amazing job changing all 23 original flights from Shanghai to the United States, now from Tokyo, Japan, to home. Done. Now we can enjoy all of our beautiful ports of call. Can you hear the sound of a record scratching?

Our first port, Manilla, Philippines, quickly denied us entry, on day 2, because the ship docked in Hong Kong, and there were already a few cases reported in that massive city. They feared that someone getting onboard the ship in Hong Kong may have traveled to mainland China and may not realize they were infected, thus infecting all of those they came in contact at their Manilla port, restaurants, tourist destinations, etc. Trying to visualize how these viruses spread like a massive spiderweb is fascinating and terrifying at the same time. It is endless. I completely understand their concern.

The logistics involved in all of this is extraordinary. In Manilla alone: All the dock workers, the visitor’s bureau staff, port vendors, the produce, meat and goods to be delivered to the ship, the fuel and water to be loaded, the scheduled shore excursions that required busses, tour guides, tickets for attractions, extra people at all those venues to accommodate 1,600 people throughout the day because our cruise ship was in port. ALL of that had to be cancelled! Then, the really disappointing aspect: over 40% of this ship’s crew are from the Philippines and this was their day to visit friends and family that most have not seen in months.

So, we make a course correction and start heading north to Kaohsiung, Taiwan, a day early. With a few days already at sea, we arrive the morning of Tuesday, February 4. Every guests is required to get off the ship with their cruise key card and passport to go through Taiwanese immigration down on the dock. Everyone back on the ship until this process is complete, then you are free to walk around town. The next day, Wednesday, February 5, is when the ship had all the shore excursions scheduled.

The morning of Wednesday, February 5, the Captain announces over the ship’s sound system that the country of Taiwan is no longer allowing anyone to get off the ship. The day before, a Chinese gambling ship holding several thousands people, was docked in Kaohsiung just in front of us, and as they were in port, supposedly, they discovered several people onboard tested positive for the coronavirus. And now, the Westerdam is persona non grata.

News must have quickly spread throughout the town of Kaohsiung that coronavirus was brought to their little town the day before because there were no cars, people or anything moving in town. The little carnival at the dock was empty and silent. It was a ghost town! Our ship sat virtually silent at the dock, no gang plank linking land to ship, just in case a crew member tested the ban, and guests looked out at Taiwan from the upper decks longing to set foot on land and explore.

Part of my job as a Cruise Host, is to hold office hours on the ship for my guests to come and ask any questions they may have about the ship, their concerns, discuss shore excursion, or if they just want to gab…etc. Holland America has given me a hospitality desk on Deck 3, near all the boardrooms, the puzzle table, the jewelry shop that plays nothing but Bon Jovi, and two beautiful windows that I look out and see nothing but the ocean and an occasional walker loafing past. The highlight of my little space is this massive interactive map of all our ports and the current location of our ship with a little yellow line showing our previous course. THIS is where the magic of my day happens. It is the office equivalent of the ‘water cooler’. Ship gossip happens 4 feet away from me, constantly.

We leave Taiwan and start heading for our next scheduled port of Naha, Okinawa, Japan. Excitement is in the air. Two countries didn’t want us for fear of contamination. Some guests are very upset, and some guests are shrugging it off because these decisions were completely out of our control. Most guests are pleased that Holland America has added two additional ports in Japan and the HAL (Holland America Lines) head office scrambled to get us optional shore excursions in each port, and everyone, for the most part, is taking it in stride. Or so I thought….

Then the media catches wind of the Holland America Westerdam ship that has been denied entry into two countries. Then, the Prime Minister of Japan and ABC7 incorrectly report that the Westerdam has a case of coronavirus. The Captain at this point, has made it perfectly clear to all souls onboard that there are zero cases on the Westerdam and they continue to monitor everyone. What most guests may not have noticed during Taiwan’s immigration screening, is that the ship had an infrared camera testing the temperature of everyone.

The guests on board start reading the more-often-than-not incorrect information in these online articles and start getting a little indignant when speaking with the crew, so much so apparently, that the Captain made an announcement making it perfectly clear that it is unacceptable to “act out” toward the crew on this ship. It is not their fault that any of this has happened to our ship. For the Captain to address guest behavior over the Westerdam’s sound system, in all the years I have been a Cruise Host, has never happened, there must have been multiple incidents to justify an announcement. What gives any human being the right to treat others with such little regard?

This is about the same time that Holland America’s sister-ship, the Diamond Princess, was off the coast of Yokohama, Tokyo, and 10 guests test positive for the coronavirus. They are not allowed to dock in Tokyo, are moored just far enough from the coast that life boats can tender the sick to shore and into waiting ambulances. The entire ship is now in a 14-day quarantine, meaning that every soul onboard is confined to their cabin. Air conditioning is shut off to limit possible contamination, food is delivered to rooms by their cabin stewards, and they are reportedly allowed outside their stateroom for one hour to get fresh air and exercise. I will be forever grateful that this has not happened on our ship.

As we made our way north along the eastern coast of Taiwan toward Japan, everyone seems just a little tense, probably in anticipation of what may happen next. But, Japan was extremely north east of Hunan, China, where the outbreak took place, so they can’t possibly be affected. Insert the Captain’s voice coming over the sound system, “This is the Captain and I have some important information and I need everyone’s attention…”

Japan and South Korea have denied us entry into their countries. Now, the search for a country / port that will accept us, begins.